The seasoned Nigerian journalist shared thread after thread of tweets accusing the film’s producers of adapting her 2014 investigative report without getting her express permission a claim EbonyLife CEO Mo Abudu has repeatedly denied.

In November 2020, Abudu tweeted an appreciation to Premium Times, commending the media house for granting her rights to the story. Abudu’s tweet and Premium Times’ subsequent statement claiming full rights to the report cast a new wave of contradictions.

Was the ‘Oloture’ story based on Tobore’s award-winning report or was it conceived by Mo Abudu and Heidi Uys‎ as the film’s opening credits reveal? Did Tobore have prior knowledge of its production and what lurks in the shadows for both journalist and production company?

In an explosive interview with Pulse, Tobore Ovuorie details her looming legal battle over ‘Oloture’. 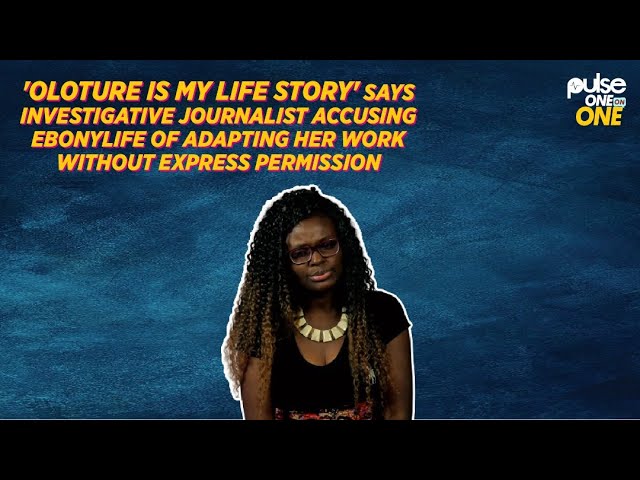 Ovuorie’s 2014 report dates back to several years before her professional career began. Occasionally breaking into Yoruba and pidgin, the 40-year-old journalist tells Pulse what inspired the story.

“The investigation took place in 2013 but I would say the foundation to the investigation happened before 2013. Some years back, while I was still an undergraduate, I had a very close friend, Ifueko“, Ovuorie recounts.

“Suddenly, she disappeared from school and I later learnt she was taken to Italy for sex work. It was a rude shock to me because Ifueko was not that type of person. She was the type that when I would go see her, she would ask me what bible passage did you read today? How long did you pray?

“Much more later, I got to learn from a classmate that Ifueko was back in Nigeria. I had to wait for my dad to come to see me in school, to give me my pocket money for the month. With that, I transported myself to Benin to go look for Ifueko. Unfortunately for me, by the time I located their house, it was her grave that I met”.

Years after the shocking death of Ifueko, Tobore reveals she struggled to find closure. “She was the one who led me to Christ and all of a sudden she disappeared. Reason ? Sex work! There was no correlation”.

Fast forward to 2013. South Africa based journalist Evelyn Groenink reached out to Tobore, who was at the time in the employ of another media house. She offered Tobore the opportunity to interview seven women about to be trafficked. Interestingly, Groenink’s proposition was timely but did not quite fit into Tobore’s grand idea.

“It was then I had to send a different proposal to her. I did state that the outcome would be wishy-washy. That, for me, wasn’t going to be a story that would transcend time. So I pitched something else and she fell in love with it. That was how the partnership or would I say relationship started”.

The top-secret investigation supervised by ZAM CHRONICLE began the same year in both Lagos and Abuja. Tobore went undercover for months as Ogogo, an aspiring sex worker seeking greener pastures. The report sought to investigate the dangerous sex trafficking business prevalent in Nigeria.

“I simply wanted to know the process. The investigation, professional but I have to admit that it was very personal for me. I had too much gaping holes in me that I needed to fill”.

Eight years after the acclaimed report, Tobore admits she is still in therapy. She recounts getting raped, tortured and forced to watch the beheading of two girls.

“To be candid, there are several memories. That which was published is only a minute part of my experiences. I deliberately didn’t put everything out because I uncovered certain things that led me to not release everything I had discovered during the investigation.

“However, there are numerous memories that I have been trying to let go off. I pushed them somewhere in me. The reason is I am trying to move on but to be honest, it has been difficult. For every time I get asked a question of my several close shaves with death, I get flashbacks.

“As a result of the investigation, I slid into depression, anxiety and panic attacks and there’s post-traumatic stress disorder which subsequently led me to be dependent on medications. I am still in therapy”.

For months, Tobore suffered in silence till she finally cried out to the Committee to Protect Journalists (CPJ) who collaborated with the International Women Media Foundation (IWMF) to get her checked into a rehabilitation centre in the United States of America.

Tobore insists the Kenneth Gyang directed film is an adaptation of her work, one she did not explicitly authorize.

” ‘Oloture’ does not closely resemble my work, It is a copy and paste of my work. Oloture is my life story. Whosoever claimed they wrote that script should be flogged”.

Detailing her first interaction with Mo Abudu, Tobore reveals the media mogul contacted her on May 29, 2019, a few days after the first private screening of the film at IMAX, Lekki. The screening held on May 27, 2019, and had the crème de la crème of Nigeria’s film and media industries in attendance.

“I recall it was May 29, 2019, that the executive producer of the movie called me. As at that time, I did not even know that they had done screening. How moral is that? How professional is that? They make a film about my life story without first getting in touch with me to get my permission”.

To get a rounded story, Pulse reached out to Gyang on Tobore’s claims. The director vehemently refused to go on record on any questions regarding the aggrieved journalist.

Tobore is not one to mince words so when she finally addresses recent claims that she was invited to a private screening of the film before it headed to Netflix, it was as emphatic as the rest of her revelations.

“Now let me set this record straight. What was shown to me before running to Netflix without my knowledge shaving my hair while I was asleep, they showed me a Hushpuppi edition of my work. Is this not equivalent to giving me a dud cheque?”

“A film that talks about exploitation, itself is exploitative. These are issues! That and now threatening me with her legal team”.

For Tobore, demanding justice for Abudu’s manipulative approach as well as several attempts to bully her into silence will not end on social media as she hopes to seek redress in court.

According to the journalist, her demands are that she gets due credit for the story which was originally credited to Mo Abudu, Heidi Uys and others. She hopes that the lawsuit, if won, would serve as a precedent for filmmakers looking to use stories without first doing their due diligence.